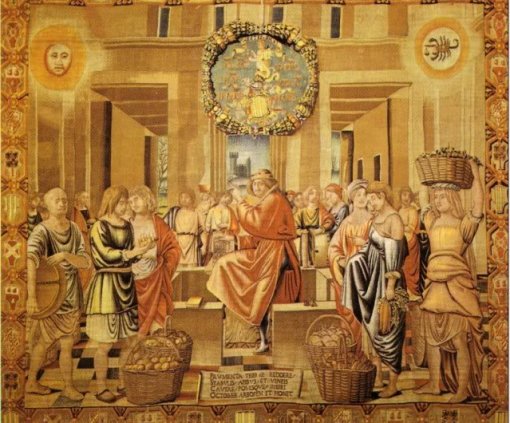 When Messer Annibale Bentivogli was ruler in Bologna, the Canneschi clan formed a conspiracy and murdered him; and even though no members of his family survived except the infant Giovanni, the people rose up and slew all of the Canneschi. This was a consequence of the popularity the Bentivogli then enjoyed in Bologna. Their popularity was so great, in fact, that, with no member of the family left to rule in Bologna, the people sent to Florence where, according to reports, there was an illegitimate offspring of the Bentivogli who had been brought up by a blacksmith. They summoned him back to Bologna and entrusted him with the rule until Giovanni reached his age of majority.

This 1445 tale is used by Niccolo Machiavelli in his 1513 masterpiece, The Prince, to illustrate the supreme premium every leader must place on the trust of his people and the esteem in which they hold him. The essence of Machiavelli’s thesis here is that a leader (prince) must endeavour to avoid those things that would make him the object of hatred and contempt. So long as he avoids these, he will have done his part and will encounter no risk at all from other vice. He should conduct himself in such a way that greatness, boldness, gravity, and strength will be observed in his actions.

In dealing with individual subjects, his decisions must be irrevocable; and he must maintain himself in such high regard that no one will ever think of cheating him or misleading him. A prince who gives this account of himself will be highly esteemed; and against someone who is highly esteemed, conspiracy is unlikely.

Attack is also unlikely, so long as he is known to be respected by his subjects as an excellent man. For a prince has only two things to fear: one is internal and concerns his subjects; the other is external. When there is no external attack, the prince must worry about hidden conspiracies, against which he will find security by avoiding hatred and contempt and by keeping the people satisfied.

Indeed, the most potent remedy a prince can have against conspiracies lies in his not being hated by the populace, for those who conspire always believe the death of the prince will please the people. When they suspect that their action will anger the people, they will not be so rash as to undertake it. “I conclude, then, that a prince need take little account of conspiracies if the people are disposed in his favour. If they are opposed and hate him, however, he must fear every incident and every individual…,” Machiavelli says.

After over one year in office, it is not yet safe to say County Executive Rushern Baker and his Education Executive Dr. Kevin Maxwell have settled into some clear, inherent trend by which their leadership demeanour and style can be assessed. The duo has, without doubt, come across as not so approachable and amiable, striking the pose of what youth call “not easy”. That is not pretty cool or quite freshing, especially coming hot on the heels of Dr. William Hite’s eternal aloofness.

But, on a more serious note, the Prince George’s County spearheads seem to have grown into the rather disturbing habits of condoning the unacceptable, excusing the inexcusable, being to prickly in the face of criticism and even displaying conduct bordering on hubris. Their handling of the runaway insecurity and the stubborn vestiges of corruption in public service is illustrative of a worrying reluctance to act ruthlessly and decisively in best public interest. And they could certainly do better in their engagement with the Opposition and generally those who hold divergent views.

Yet you can never go wrong by walking on the right side of history, with the people. Robert Green best highlights our point here when he says: “Occasional mistakes are inevitable. People in power, however, are undone not by the mistakes they make, but by the way they deal with them. In the last several months, we have highlighted our displeasure with the following individuals in leadership capacity in the Headquaters of Prince George’s County Public Schools (PGCPS) at Sasscer involved in questionable activity. The list includes but is not limited to Robert Gaskin, Shauna Battle, James Fisher, Shani Whisonant, Monica Goldson, Thatcher Law Firm via Abbey Hairston and anyone else involved in public corruption in Prince George’s County.

Like surgeons, Prince George’s County leadership must cut away the tumor with speed and finality within the Prince George’s County public schools as highlighted. Excuses and apologies are much too blunt tools for this delicate operation…The mistake does not vanish with an apology; it deepens and festers. Better cut it off instantly, distract attention from yourself…”