According to Washington Post, The Prince George’s County Board of Education, facing a rocky start in a new era of school governance, has entered into a short-term agreement with a corporate foundation to help ease its transition from an elected board to a hybrid board with government oversight.

Board Chairman Segun Eubanks said the school board voted Thursday night during a closed session to partner with Panasonic Foundation, which works with urban school districts to implement education reforms. He said the partnership is designed to “move [the county’s] agenda forward. “Reports reaching reform Sasscer Movement  according to Mr. Edward Burroughs (District 8), said,  “the new structure has created a situation where there is no accountability to the board because board leadership is appointed.” He said, “for example, that a member of Baker’s administration received a presentation from Panasonic, but most board members were excluded. Still, the board was asked to vote on the agreement.”  Further Mr. Edward Burroughs’s District 8 lost substantial funding due to recent corruption in which money ($1.4 Million) was sent back to Annapolis.  Reform Sasscer movement is against side deals being conducted at night and away from the public. This is the reason why we lobbied lawmaker to create the current Board with a great hope things were going to turn out for the better >>>Read more Washington Post

Without mass media, openness and accountability are impossible in democracies. Our prayer is to make sure that, what we advocated for is a dared to within the school system. We want the medium to be transparent to vision so that we can accurately view what is on the other side. As articulated before, Mr. Rushern Baker’s biggest test is creating a smooth transition within the schools to include transparency and avoid appointing leaders from the old regime who caused problems in the first place. However, if he wants to pass this test, he must persuade every single PG County citizen that he has sincere intentions that transcend his own political interest, for the wellbeing of the County to include other groups into the change management with the New CEO. One can well understand why politicians would want to divert attention from information that is detrimental to their interests as open expressed by Mr. Burroughs and others recently. Our interest as media blog is very different as we are interested in transparency and accountability issues on behalf of everyone.  Indeed, the media’s interests are quite different from those of politicians. Nevertheless the media’s collective efforts also subvert the political values of transparency, even – and perhaps especially – when media and politicians view each other as adversaries.  BOE members who caused problems in the first place must be encouraged to resign to create a smooth transition.

Most individuals have only limited time and attention to devote to public issues. Political values of transparency do not demand that citizens spend all of their time on public subjects. Rather, they make information available to individuals so that they can use it if they so choose. But when there is too much information, filtering necessarily occurs. This filtering occurs both in terms of what media decide to cover and what individuals decide to watch. Media companies must pick and choose among hundreds of possible subjects to discuss especially as we move forward in the new era of accountability. Individuals must choose among thousands of hours of potential coverage of public events and we plan to do this in the future. 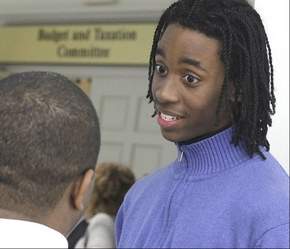 Mr. Edward Burroughs whose district is affected by corruption.