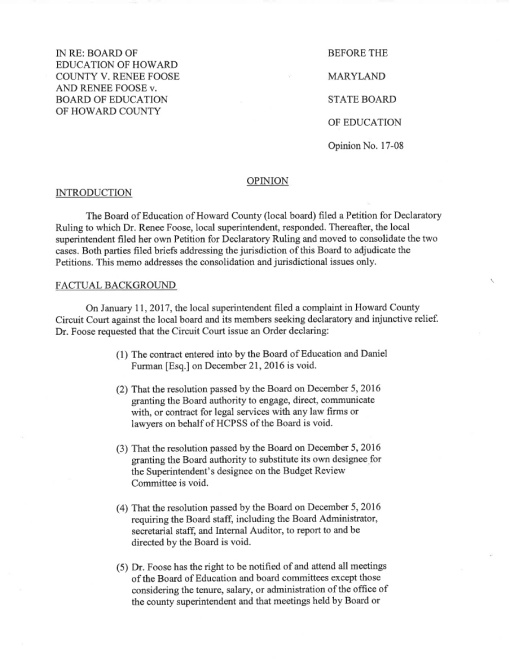 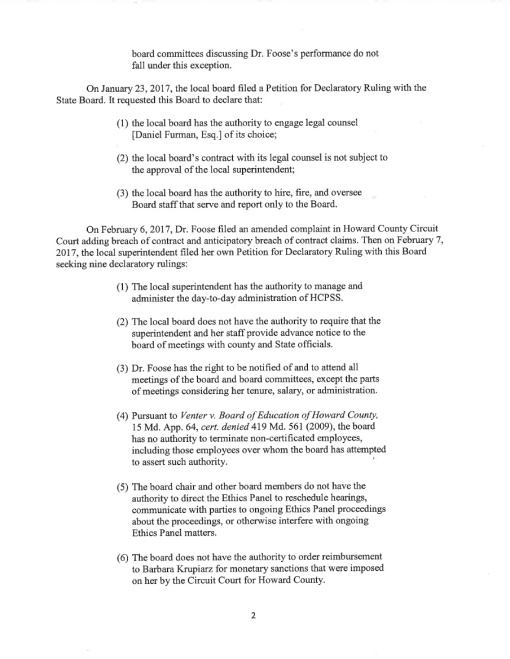 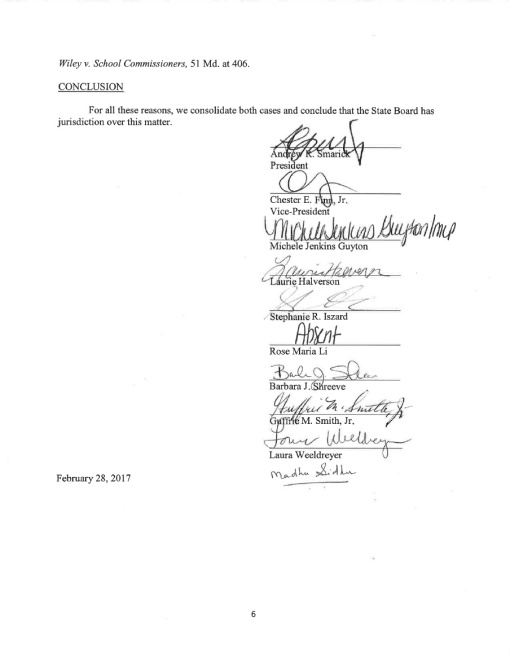 Since most Maryland students didn’t pass a tough new test that eventually will be required for graduation, should the state lower the bar?

The state school board began considering the question Tuesday as members discussed options, including setting a lower passing grade or offering a second-tier diploma for students who finish required high school courses but can’t pass the PARCC test now used in a dozen states.

The Maryland board has until May to decide what standard to set for students entering ninth grade next fall.

High schools in the state gave the new Partnership for Assessment of Readiness for College and Careers test, tied to the Common Core curriculum, for the first time last spring. A much smaller percentage of students passed than did the previous high school exam, known as the High School Assessment. Thousands failed.

At its monthly meeting, the board engaged in a spirited debate over what to do about that.

Board member Chester Finn reacted swiftly to a suggestion that the state accept a lower standard. “I thought the move to PARCC was to increase standards,” he said. “We are headed toward telling Maryland students they will get a Maryland diploma and they are not ready.” He said a low standard would mislead the public.

He suggested the board consider adopting a two-diploma system, one for students who passed PARCC and are considered ready for college and a second diploma, equivalent to what is given today, for students who have fulfilled the course requirements and achieve minimum passing grades on state tests.

But school board member James H. DeGraffenreidt said he is opposed to such a dual diploma system because he believes it would institutionalize the achievement gap for groups of students with low pass rates, including low-income, minority and special education students.

DeGraffenreidt said he believes it would be better to keep the goal high but gradually phase in the standards, starting with a low passing score and setting specific dates to raise it. The question for the state would then be how quickly students might be able to meet the new standards.

The goal of having high percentages of high school graduates ready for college is unrealistic in the near future, some education experts say. Less than half the states require passage of high school exit exams to get a diploma. And only in the past decade has the idea been entertained of making college readiness a graduation standard.

“There is no state in the U.S. that has made the high school graduation requirement the same as a college-readiness requirement,” said David Steiner, executive director of the Johns Hopkins Institute for Education Policy. “It is just not possible politically or otherwise to introduce a system that would prevent that many students from graduating.”

Because last year’s test takers knew the results didn’t count for them, education officials say they believe pass rates will go up as students view the tests more seriously.

In addition, students can take the tests numerous times, and they can substitute a teacher-supervised project if they fail a test. Because the bar for passing state exams was relatively low in the past, very few students were prevented from graduating.

Whether all students will ever be college ready is still a question, said Michael J. Petrilli, president of the Thomas B. Fordham Institute, a conservative Washington think tank. He believes most states will phase in higher passing scores.

School board member Linda Eberhart, a former teacher, said she is deeply concerned that Maryland may raise standards too quickly for students who have not had the Common Core curriculum for most of their schooling.

“It is going to take 13 years to achieve these new standards,” Eberhart said, indicating that the first class likely to be fully prepared are today’s kindergartners.

She is concerned, she said, that next year’s ninth-graders will be held to an unrealistic standard.

“It is a high standard, and it would be unjust, in my view, to jerk up the standards,” Steiner said. “You have to build a ladder, but you also have to tell the truth.”

Prince George’s County Public Schools teachers are less effective than other districts in the state, according to data released by the Maryland State Department of Education (MSDE) in October.

The teacher evaluation data did not include standardized test scores, but test scores will be considered in evaluation models starting June 2016 at the earliest, said David Volrath, a planning and development officer for MSDE.

“We have to be able to capture a student’s growth, which requires at least two years of data,” Volrath said. “We can’t promise anyone that is even doable in the 2016-17 school year.”

The teacher evaluation data is from the 2013-14 school year, when MSDE launched a statewide implementation of a new teacher and principal evaluation system.

“This is a starting point, it was designed for us to answer questions,” Volrath said. “We’re in no position to proclaim anything at this point.”

Parents should be cautious and not over react to the data, Volrath said. “This is a setting of the bar stage, we are using the information in a developmental way to help teachers and principals become better practitioners.”

There was no target for percentages for ineffective, effective or highly effective teachers or principals, Volrath said.

PGCPS officials say it is not completely accurate to compare Prince George’s County to other counties because of slight differences among evaluation systems, but they also say they are working to recruit and retain effective teachers.

“We need to look at the data and say with this rating, we need to provide this additional support, either systemically or at individual schools,” said William Ryan, executive director of employee performance and evaluation. “We will use the data received to make our teachers better and better and to support our students.”

Deborah Sullivan, director of human resource strategies and workforce planning for PGCPS, said it can be challenging to recruit effective teachers because of the competitive market in the metropolitan area.

“The supply is not meeting the demand,” Sullivan said. “The state of Maryland is an ‘import’ state, we don’t produce enough educators to cover vacancies we have in the area.”

Both Ryan and Sullivan said the school system is bolstering its efforts to recruit and retain effective teachers.

For current teachers, Sullivan said the school district is trying to improve teacher mentorship and make teachers aware of leadership opportunities. This month, the school system is launching a peer evaluation and mentorship program for teachers new to the county, Ryan said.

Union corruption around the world has become a major problem for workers and especially in Prince George’s County District in particular where County Executive Mr. Rushern Baker III has turned them into pig banks starting with ASASP Union, PGCEA, MSEA, ACE- AFSCME Local 2250 and others . >>> Read more ~ Big losses for the Labor Unions in Election 2014.

On October 1, 2013, Dr. Lillian Lowery Maryland State Superintendent and her company will be touring our beautiful county to answer questions related to common core.  After a firestorm of charges from parents in other parts of the state that questions from the attendees were screened and reworded at the Common Core meeting in Baltimore County on Sept. 19, the MSDE will repeat the same format at the Prince George’s County forum during the meeting at Springdale.

Bill Reinhardt, Public Information Officer for MSDE, said, “We tried it with open mic the first time [in Talbot County] and we got about half the questions answered.”

The Prince George’s County meeting will be the final of four Common Core meetings in the state.

When questioned on how they would address the concerns of parents who said their questions were screened and reworded, he said, “Some of the cards went 4-5 paragraphs, so they were re-worded.”

Please call the office of MSDE Superintendent Lillian Lowery at 410-767-0462 and request that the format of the meeting be open mic instead of written questions.

The Common Core forum in Prince George’s County as indicated is tomorrow October 1 from 7-8:30pm at Charles Herbert Flowers High School in Springdale as indicated above.

STAY INFORMED: Subscribe into our blog to receive free email notifications each time we post a new article.  Thanks for supporting reform Sasscer Movement for Prince George’s County in Maryland! 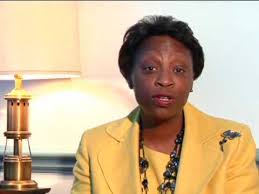 “Don’t Be a Cattle!” is a newly formed group that began after the arrest of Robert Small for asking a question out of turn at an MSDE forum on Common Core.  In just one week, the group has amassed a Facebook following of more than 3,500 members and growing.

“Many parents in attendance at the school board meeting on Sept. 19 were growing increasingly frustrated by the screening and rewording of the questions which were required to be submitted in writing.  At no time in the ‘forum’ were parents allowed to ask direct questions, follow-up, or clarifications,” said group founder Ann Miller, whose YouTube video of the incident garnered national attention and has received a million hits.

The MSDE adopted Common Core in June of 2010 in exchange for a quarter billion dollars in federal incentive funding through a Race To The Top grant which was conditioned upon adherence to Common Core.  In all that time, when the MSDE could have been asking for public input and educating parents on the standards, instead there was an information blackout.  The public is only just now, upon its implementation and after the expenditure of untold taxpayer dollars, even learning about the new overhaul to our education system.

Instead of putting out propaganda videos that avoid direct questions, “Don’t Be Cattle!” calls upon Superintendent Lilian Lowery to finally answer direct questions from parents, teachers and the public – openly and honestly without editing.

The list of questions below was compiled by parents who attended the meeting in Towson and feel their questions were never addressed.  They are only a few out of many unanswered questions.

The group is also requesting the protocol of the Question and Answer portion of the meeting be changed to open mic, rather than written questions.

A Sampling of Parents’ Unanswered Questions on Common Core

It is time to remind the Maryland State Board of Education that the parents pay the school taxes and entitled to ask questions and God forbid the statement or question is longer than two (2) minutes..

Beginning next year, We are going to do the right thing and start putting people in office that will respect the law and stand up to power hungry unions and beaureaucrats, and their dictatorial ways. It’s time!

We must get our act together, for goodness sake!

After a stint in the military and on his way to earning a bachelor’s degree  in physics from the University  of Maryland, Baltimore County, Rory Holderness decided he wanted to become a  high school teacher.

He enrolled in Towson  University‘s graduate program for teachers three years ago but soon became  frustrated with classes that he believed were more aimed at grooming elementary  reading teachers than someone who hoped to be teaching physics to 16-year-olds.  He dropped out.

“The whole system was pretty frustrating,” said Holderness, who might have  ended up with a career in a classroom instead of working for AT&T had he  found the route to becoming a licensed teacher easier.

A recent report by the Calvert Institute for Policy Research found that  becoming certified to teach in Maryland is so burdensome that it is causing  teacher shortages in key subjects such as science, math and special education.  And the report suggests that the state should alter some of its teacher  certification requirements to open up the field to a larger number of  candidates.