Prince George’s County Council member Mel Franklin was charged with driving under the influence after he crashed a government-owned vehicle recently into a car stopped at a traffic light, police said.

Franklin (D-Upper Marlboro) was traveling south along Pennsylvania Avenue in a county SUV about 11:30 p.m. Nov. 21 when he rear-ended a Mercedes stopped at a light near Dower House Road, according to Maryland State Police.

A breath test measured his blood alcohol concentration at 0.10, according to a copy of a police report obtained by The Washington Post. In Maryland, a blood alcohol level of 0.08 or more supports a DUI charge.

Franklin, a longtime community activist and lawyer, was first elected to the County Council in 2010 to represent some of the most rural parts of southern Prince George’s County. He is widely considered one of the lead candidates to succeed County Executive Rushern L. Baker III (D) in 2018. But Democrats say he has also been eyeing one of the two new at-large seats created following the November referendum vote to expand the council.

An SUV allegedly driven by Prince George’s Council member Mel Franklin in a Nov. 21 collision in which he has been charged with DUI. (Image via Jaklitsch Law Group)

News of his arrest prompted a demand for his resignation from Progressive Prince George’s, a county branch of a statewide coalition of civic activists and grass-roots organizations working on local progressive politics.

“We believe that he can no longer be entrusted with public responsibility because of his disregard for the law,” the group said in a statement Wednesday that called for Franklin to personally cover the costs of “any property damage and medical bills” resulting from his alleged actions.

Franklin did not respond to a request for comment on his arrest. His attorney, Theresa Moore, confirmed his involvement and said, “as you are aware, this is a legal matter and these issues will be addressed in court.”

Franklin is expected to receive a summons with a court date, though it was unclear when that would occur.

County Council Chair Derrick Leon Davis (D-Mitchellville) said in a statement that Franklin has “relinquished the use of his county vehicle and no longer has use of or access to any county-issued vehicle.”

When troopers arrived at the crash, Franklin was not in the immediate area of the Ford Explorer he was driving, police said. A trooper spotted him about 70 yards away in the center median, crossing the road before walking along the shoulder of the highway, police said. 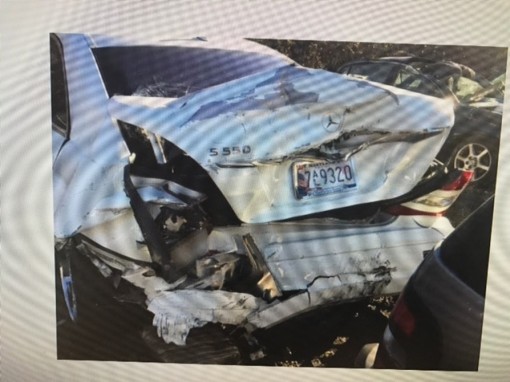 The car allegedly hit from the rear at a traffic light by Prince George’s Council member Mel Franklin in a Nov. 21 collision. (Image via Jaklitsch Law Group)

It’s unclear from the police report why Franklin was away from the SUV. The incident was first reported by WJLA-TV (ABC7).

Police identified the driver and the passenger of the Mercedes hit as Matthew and Theresa Collins of Upper Marlboro.

The couple have been released from the hospital but is still undergoing medical treatment, according to their attorney, Christine Murphy of Jaklitsch Law Group.

Murphy said the couple were driving home when they were stopped at a red light and “suddenly struck from behind.” “They’re definitely shaken up,” Murphy said.

Franklin was released to the custody of his wife, according to the initial incident report obtained by The Washington Post, which also shows he turned 41 Wednesday.

Based on information in the police report, it appears Franklin could be subject to the state’s new, tougher ignition-lock law, dubbed “Noah’s Law” after a Montgomery County police officer fatally struck by a drunk driver.

The long-stalled bill to expand use of ignition locks was approved in the final hour of the annual legislative session, in which legislation over alcohol and driving figured prominently. It lowers the offending blood alcohol level at which ignition locks are required from 0.15 to 0.08.

“According to the law, effective Oct. 1, a first-offense DUI conviction would require installation of an ignition interlock,” said Greg Shipley, a spokesman for state police.

Franklin was charged with driving while impaired by alcohol, driving while under the influence of alcohol, negligent driving and failure to control speed on a highway to avoid collision, police said.

State police said they will work with the Prince George’s state’s attorney’s office to determine whether any other charges are necessary.

John Erzen, a spokesman for the state’s attorney’s office, said that because Franklin is an elected county official, the office will secure a prosecutor from another jurisdiction to handle the case.

Council members have the option of using the county government’s fleet of vehicles, with the cost deducted from their paychecks. If council members use their own cars for government-related travel, they receive an allowance to help offset costs.

Barry Hudson, a spokesman for Baker, deferred questions about Franklin’s vehicle use to the council, which did not have immediate answers to questions regarding Franklin’s record of using county-owned vehicles.

Retired Prince George’s firefighter Jonn Mack said that he has known Franklin for more than a decade since their time as Young Democrats and that Franklin is a “fighter for the community” who had won the trust of constituents and was focused on bringing needed development to the county.

“This is completely out of character,” Mack said in an interview Wednesday.