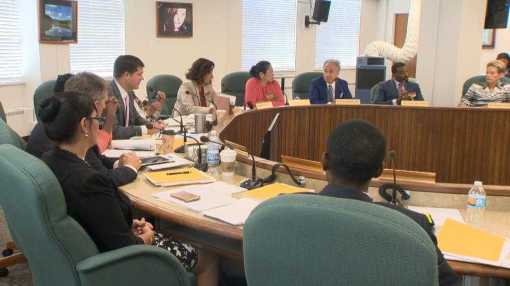 For the first time, an active schoolteacher will be elected to sit on Maryland State Board of Education. Maryland Teachers started casting their ballots this past weekend as voting started on Sunday. It’s a big deal because it’s the first time teachers will get to choose who represents them on the State board.

We need a teacher who is in a school every day, who can take a look at that policy or this policy and say this is how it’s going to come out when we see it there and give the board that advice,” said Delegate Eric Ebersole, D-Baltimore and Howard counties.

Cheryl Bost, president of the Maryland State Education Association, told the press that, the current board is lacking members with education experience.

“None of them are actively teaching. Many of them have never been in a classroom before. They’re from the business world or from private education, and so now, we will have an active practitioner who will have a voice,” she said.

Thirteen teachers are on the ballot. The candidates work at schools throughout the state.

“All teachers here in the state of Maryland, public, private, everybody will get an email with their biographies, the names of the candidates,” Bost said.

The bill requiring the change passed in the last legislative session.

“When we talk to many of our educators, they are excited that somebody who actually walks the walk with them will be able to represent them,” Bost said.

Ebersole, who is the sponsor of the House version of the school board bill in the General Assembly, is encouraging teachers to participate in the process.

Another new seat on the board will be filled by a parent. The PTA will work with the state Senate to select three candidates. Gov. Larry Hogan will choose one of them.

“These board members will come to respect these new members as people who have a perspective they can rely on,” Ebersole said.

Teachers have already been emailed a link, and voting started at 12:01 a.m. Sunday.

Voting ends Nov. 17. The results will be released by Dec. 23, and the winning candidate will serve for 2 1/2 years.

There are concerns that, the Maryland State Education Association (MSEA) is supporting a particular candidate instead of being neutral at the exercise. This conflict is causing concerns because of past and present public corruption involving the union staff in Maryland led by MSEA attorney Mr. Damon Felton.

MSEA as a union is not a saint and has caused problems for teachers in Maryland after going to bed with management. Legal recognition of a union has traditionally been achieved through secret ballot elections, in which each worker decides whether or not to support a union in the privacy of the voting booth — just like a person votes for the president or a senator. But unions frequently lose secret ballot elections. So they often bring intense pressure on companies to agree to a “card check” system instead of a secret election.

Employees who no longer want a union to represent them — whether it’s because the union is undemocratic, corrupt, violent, or just plain inept — are entitled to seek an election to determine if a majority of their coworkers want to drop the union. Such elections, which are conducted by the National Labor Relations Board (NLRB), are known as “decertification elections.”

Employees who want to vote a union out must circulate a petition calling for a decertification election. They should not seek help from their employer, because the union can then complain that an unfair labor practice has tainted the election. Employees may take advantage of outside assistance, though. Signatures should be collected on non-work time and in non-work areas. It is important that the names of the union and the company be filled in before any signatures are collected. MSEA endorsement of a particular candidate when the MSEA as union corrupt and facilitating a scheme of deception and obstruct of justice is unfair to teachers in Maryland. Keep in mind MSEA has been sued many times over the years.

For more information on the process and where to vote, please click here.