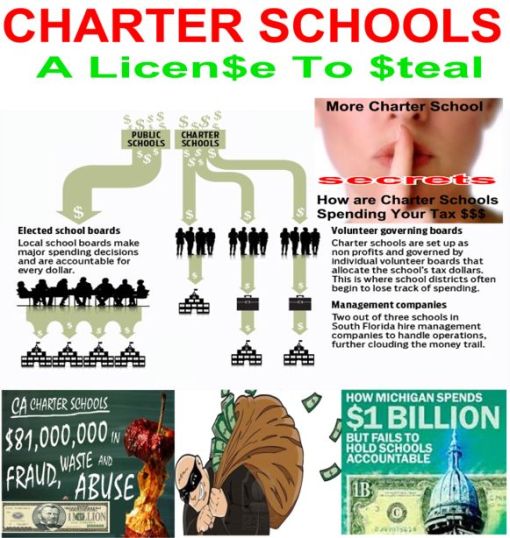 In this post, a parent activist in Northern California succinctly described the case against charter schools.

Charter schools are free to pick and choose and exclude or kick out any student they want. They’re not supposed to, but in real life there’s no enforcement. Many impose demanding application processes, or use mandatory “intake counseling,” or require work hours or financial donations from families – so that only the children of motivated, supportive, compliant families get in. Charter schools publicly deny this, but within many charter schools, the selectivity is well known and viewed as a benefit. Admittedly, families in those schools like that feature – with the more challenging students kept out of the charter – but it’s not fair or honest, and it harms public schools and their students.

Charter schools are often forced into school districts against the districts’ will. School boards’ ability to reject a charter application is limited by law; and if a school board rejects a charter application, the applicant can appeal to the county board of education and the California state board of education. Then the school district winds up with a charter forced upon it, taking resources from the existing public schools. Often this means the district must close a public school.

Anyone can apply to open and operate a charter school, and get public funding for it. The process is designed to work in their favor. They don’t have to have to be educators or show that they’re competent or honest. They may be well-meaning but unqualified and incompetent, or they may be crooks. Imagine allowing this with police stations, fire stations, public bus systems or parks.

Part of a school district’s job is to provide the right number of schools to serve the number of students in the district. When charter schools are forced into the district, that often requires existing public schools to close. Again, that harms the district and its students.

California law (Prop. 39) requires school districts to provide space for charter schools, even if the district didn’t want the charter. Charter schools are often forced into existing public schools (this is called co-location), taking space and amenities away from their students and creating conflict. This is a contentious issue in other states too.

Charter schools can be opened by almost anyone and get little oversight, so they’re ripe for corruption, looting, nepotism, fraud and self-dealing. Corruption happens in public school districts too, but charter schools offer an extra tempting opportunity for crooks, and the history of charters in California and nationwide shows that wrongdoers often grab that opportunity.

Charter schools, backed by billionaire-funded pro-privatization support and PR machinery, have positioned themselves as an enemy to school districts, public schools and teachers, sending their damaging message to politicians and the media. These charter backers pour millions into electing charter-friendly candidates. Tearing down our public school system and our teachers, as the charter sector does endlessly, harms our public schools and their students.

The charter sector tends to sort itself into two kinds of schools. Charter schools serving low-income students of color often impose military-style discipline and rigid rules – hands folded on the desk, eyes tracking the speaker, punishment for tiny dress code violations, a focus on public humiliation. By contrast, some charter schools serving children of privilege are designed to isolate the school from a district so that lower-income kids aren’t assigned to the school. Charter schools overall have been found to increase school segregation.

Despite the many advantages charter schools enjoy, they don’t do any better overall than public schools. The rallying cry for charter schools used to be that the “competition” would improve public schools, but that hasn’t happened. In charter schools’ more than 20 years of existence, they haven’t overall brought better education to impoverished communities.