Every morning, she woke up fearing what the day would bring. Jennifer Eller loved her work as an English teacher in Maryland’s schools. But as a transgender woman, she said she was taunted, accused of being a pedophile and a pervert, and threatened.

The toll grew too much.

Eller reported incident after incident to officials in the Prince George’s County school system, she said — starting in 2011, when she first came out to her principal and began living more openly as a woman while teaching English at Kenmoor Middle School in Landover.

The school system failed to effectively intervene as she was repeatedly harassed by students, parents and colleagues, she said. She transferred twice to new schools. When she filed formal complaints after four years, she alleges school officials retaliated.

The federal Equal Employment Opportunity Commission determined her claims had merit, finding reasonable cause to believe she had been treated unlawfully and retaliated against, according to her attorneys.

“This is about who I am, and everyone has the right to be who they are,” she said in an interview.

Her story has begun to emerge in federal court records in Maryland, where her lawyers filed a lawsuit alleging that the school system violated constitutional protections and federal, state and county laws by discriminating against Eller on the basis of sex and transgender status.

Omar Gonzalez-Pagan, one of Eller’s attorneys, argues that inclusiveness and diversity should come with the territory in a public school system — and that others in the region have adopted elaborate and affirming guidelines, including the District and Montgomery County.

“What we have here is a problem that is truly systemic,” he said.

Prince George’s County school officials declined to comment on the case, saying they do not discuss pending litigation.

They noted a 2017 school board resolution expressing support for the rights of transgender students and cited a procedure that allows students and staff to file complaints about discrimination and harassment. Schools spokeswoman Raven Hill said county schools follow State Department of Education guidance on youth gender identity nondiscrimination.

Eller, 41, said she took a job with the state’s second-largest school system in 2008. She had grown up in Minnesota, gone to college in South Dakota and earned a master’s degree in her home state. Along the way, she worked with children — and discovered a calling.

She followed teaching jobs to Maryland.

At Kenmoor Middle, she said she was English department head for a year and led a poetry club. But problems arose after she informed the principal she would be transitioning and wore more traditionally feminine clothing, she said. Students called her a pedophile, and other harassment ensued, her complaint said.

An administrator told her not to wear dresses or skirts because it would make people uncomfortable, it alleged. A human re­sources representative called a note from her therapist about her transition “garbage” and insisted that she appear as male, it said.

“I wasn’t being flamboyant,” Eller said. “I wasn’t shoving this in people’s faces. I was trying to do this within their parameters as much as I could, in keeping with my own mental and physical health.”

Hoping for a fresh start, Eller transferred to Friendly High School in Fort Washington. There for five years, she taught English, including Advanced Placement classes, while serving as a sponsor for the National Honor Society and the Gay-Straight Alliance.

But it was not an improvement.

“My first year there, I felt like an animal in a zoo: People would stand outside my classroom door as I was teaching and stare at me,” she said.

“I felt like an animal in a zoo: People would stand outside my classroom door as I was teaching and stare at me.” — Jennifer Eller, a transgender teacher in Prince George’s County schools.

Eller’s 41-page complaint alleges numerous incidents at Friendly, describing times when students called her “mister” or “he/she” or asked her about the appearance of her genitals.

In 2012, a Friendly student and his friends encountered Eller in a parking lot and threatened to rape her and make her “their girlfriend,” the document said.

Eller said she reported that incident — as she had many others — but it, like most of those she called out, appeared to go nowhere. The student denied it, and Eller was told there was nothing the administration could do, according to the court filing.

“There were very few days when something didn’t happen,” Eller said.

The lawsuit details a long line of incidents by date in 2015-2016: when two students in a hallway called Eller “a guy in a dress”; when a student stepped hard on her foot, saying “tranny” as he walked away; when a student greeted her approach by telling a classmate, “I’m not speaking to it.”

Sometimes, the offensive behavior came from parents, she said.

When she was home at night or alone during a lunch break, she said in an interview, her situation would often sink in.

“That’s when I felt the horror of being treated as subhuman,” she said.

An administrator referred to her as “sir” or “mister,” even though she arrived at Friendly after her transition, the suit said. The school system took three years to change the name on Eller’s email address — meaning her transgender status was revealed to those who emailed her. Her old name remains in an employee directory today, the court filing noted.

It was 2015 when Eller filed formal complaints: first with the school system, then with the federal EEOC.

She asserts that she was retaliated against afterward — losing her Advanced Placement English classes and brought to a disciplinary hearing. Eller was accused of throwing a pen at a student, not properly teaching, shouting at students and causing them to fear for their safety. She denies the allegations. She was not sanctioned, the suit said.

Jennifer Eller, a school teacher and transgender woman, said that she was repeatedly harassed by students, parents and colleagues — and that the Prince George’s County school system failed to effectively intervene. (Calla Kessler / The Washington Post)

Hoping again for a new start, Eller arrived at James Madison Middle School in Upper Marlboro in August 2016. But the insults and hostility continued, the suit said, and after a student threatened her in October 2016, she decided that was it.

“The walls I had been putting up to keep me functioning, they broke,” she said.

Eller took a leave of absence and checked into an outpatient psychiatric program at MedStar Georgetown University Hospital, where she was diagnosed with post-traumatic stress disorder, according to the complaint.

“They allowed a culture of discrimination . . . and every time she said something, nothing was done, and it didn’t seem to matter how severe the event was, it got the same reaction,” said attorney Paul Pompeo, of Arnold & Porter, the large international law firm in Washington that took up her case in 2016.

In mid-August 2017, Eller said she felt forced to resign, believing she would not hold up to the strain if she went back.

Shortly afterward, the EEOC weighed in.

The federal agency determined that there was reasonable cause to believe Eller’s claims of harassment based on sex and gender, according to the suit. It found Eller was “subjected to an environment that contained frequent comments about her sex and surgical status; and in which she was routinely misgendered and subjected to sex stereotypes,” the suit said.

The EEOC said the treatment came from students, parents, staff and administrators, and that evidence revealed the school system was aware of the conditions “and failed to take effective corrective action,” the court filing said.

An EEOC spokeswoman said the agency does not comment on or confirm complaints.

Following the EEOC action and a notice of the right to sue from the Justice Department, attorneys from Arnold & Porter filed the complaint in late November. A few weeks later, civil rights group Lambda Legal, where Gonzalez-Pagan is an attorney, joined in.

The lawsuit asks for back pay, lost benefits and compensation for monetary and non-monetary losses, along with the institution of training in Prince George’s County.

Eller said she hopes the case will address what she endured and will make a broader difference, so others don’t experience what she did.

“What I want to see is an education system where all people are valued,” she said. 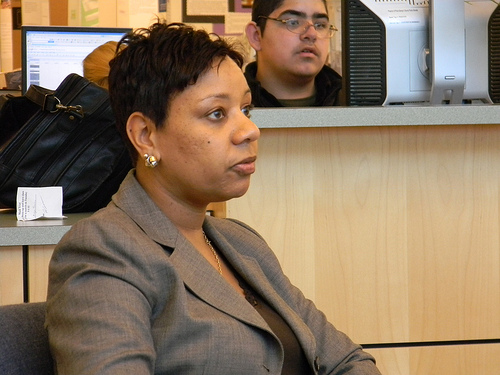 Interim CEO Monica Goldson is being sued for facilitating the discrimination, hostile work environment, and retaliation. Monica is accused separately too of facilitating a big web of conflict of interest and cover ups including public corruption involving union executives. According to personnel familiar with the issues. The Union executives are part of the scheme which is driven by Association of Supervisory and Administrative School Personnel (ASASP), Prince George’s County Education Association (PGCEA) and American Federation of State, County and Municipal Employees (AFSCME). If Monica really wants to do something, she needs to investigate when she had oversight as COO. That’s when the real corruption was happening which is being covered up and is continuing. Members of the public are asked to demand Monica Goldson resigns at the earliest opportunity.