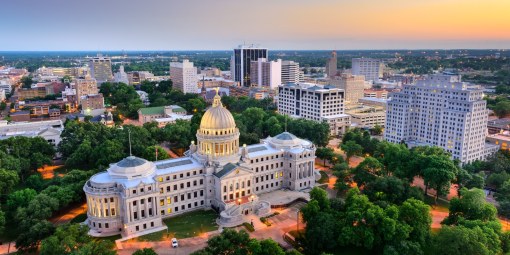 (Jackson, Mississippi, seen here at dusk). Jackson, officially the City of Jackson, is the capital and most populous city of the U.S. state of Mississippi. The city of Jackson also includes around 3,000 acres comprising Jackson-Medgar Evers International Airport in Rankin County and a small portion of Madison County.

It’s important to remember that segregation academies were created as the first statewide examples of school choice. Their purpose was to allow white students to avoid being forced by federal courts to go to school with black students after the Brown vs, Board of Education decision in 1954.

Senator Hyde-Smith’s alma mater, Lawrence County Academy, “was established in 1970, one year after the U.S. Supreme Court ordered Mississippi to desegregate its schools. For 15 years after desegregation became law of the land, Mississippi dragged its feet on integrating black and white students.”

It was part of the school choice movement across the South whose purpose was to avoid and defeat desegregation.

Charter schools provide an opportunity for focused learning using innovative curricula and instructional methods with the goal of enhancing student achievement. They have the potential to facilitate education reforms and develop new and creative teaching methods that can benefit children in all public schools.

However, research has shown that charter schools are not a panacea for every problem plaguing students despite public corruption plaguing them at very turn within their ranks. The state of Maryland is not doing enough to curb public corruption within the schools. If anything, the state officials have been busy covering things up. College park academy raised eyebrows when it was launched in 2017. Public Corruption tied to it continues to this day.

Time has come to stop the charter school movement from spreading further in Maryland at the expense of the public schools. A few public school officials involved in malfeasance must be exposed and let go.

College park academy raised eyebrows when it was launched. Public Corruption tied to it continues