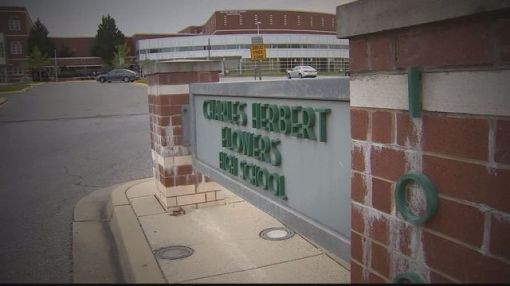 WASHINGTON – The attorney for three Prince George’s County Public Schools employees suing over a hidden camera says the school system has provided no explanation about why the camera was placed in the principal’s office at Charles H. Flowers High School.

“To date, we haven’t received an explanation,” said Erick Tyrone of The Tyrone Law Group. “Certainly not one that’s been sufficient.”

The camera was disguised as a smoke detector and was discovered at the school in April. According to the lawsuit, it had been there recording video for more than two years.

The three people suing are Flowers principal Gorman Brown, former resident principal Mar-C Holland and secretary Donna Bussey. All are claiming that what happened has caused them emotional and mental distress.

The lawsuit says not only did the staff members and their kids occasionally use the office to change clothes, but so did students on the Flowers Pom and Dance Team.

The principal’s office is part of a larger suite that includes a bathroom and shower, according to the lawsuit.

“Where the camera was placed, I think it was at least a possible that you could have seen someone entering or leaving that restroom,” said Tyrone.

He says soon after the camera was discovered, someone who works with the school district’s Security Services admitted to installing it and named the person within Security Services who gave those instructions. But Tyrone says he believes authorization for this would have to go higher up the chain of command.

“Someone from the administrative, from the Prince George’s County school board, apparently is the one that authorized the Security Services to place the camera,” he said.

FOX 5 asked if there could be any set of circumstances where what happened was legal.

“If there was a subpoena,” he said. “If they had used the appropriate channels to go through the police or through the state’s attorney’s office to get a subpoena to have the surveillance taking place. Then potentially it could have been legal.”

No one from Prince George’s County police or the school district has publicly indicated the camera was part of a law enforcement investigation.

The camera was discovered on April 13, according to the lawsuit.

It says an assistant principal was looking for security footage after a hit-and-run in the parking lot.

He clicked on a school system camera labeled “main lobby” and realized it was a live feed of the principal’s office.

He alerted resident principal Holland who was in the office at the time. The lawsuit says that Holland pulled up the camera on her computer and was able to see herself at her desk. She found the hidden camera in a smoke alarm in the corner.

At a press conference on April 16, Prince George’s County Police Chief Hank Stawinski said the case was under investigation by the police department’s Public Corruption Squad, that he didn’t believe the camera was intended for criminal purposes and that it was unclear who placed the camera. Soon after, the FBI joined the investigation to help analyze data.

There has been no update from police on the investigation since then.

A spokesman for Prince George’s County Public Schools says there is no comment on the case because of the ongoing police investigation.

The three employees are asking for an undetermined amount in damages.