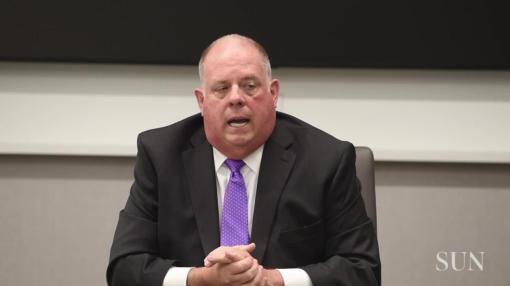 Governor Larry Hogan talks about Maryland’s opioid epidemic during an interview with the Editorial Board of The Baltimore Sun. After Larry Hogan vowed to take on Maryland’s opioid epidemic, deaths soared. What happened? Corruption in Prince George’s County and in Maryland soared too and violations covered up by the state all the way to the U.S Supreme Court in an organized version. What happened under Governor Larry Hogans watch? Where is the conservative agenda?

By Baltimore Sun Editorial Board

When we asked Gov. Larry Hogan about opioids in a recent editorial board interview, he took less evident satisfaction in discussing his record than he did when we asked about education, the environment, health care or most anything else. It’s not that he’s ignored the issue — far from it. He has, in his words, “tried everything.” Maryland has devoted more resources to combating opioid abuse (if not nearly as much as advocates say is necessary). It has expanded the availability of the anti-overdose drug Narcan and persuaded the federal government to let Medicaid cover some residential drug treatment. It has taken steps to prevent the abuse of prescription painkillers, and it has established a system for coordinating the response to the epidemic across the state. And still 2,282 people died of overdose deaths in Maryland last year, the vast majority from opioids and increasingly because of the spread of the highly potent synthetic drug fentanyl. “We’ve done more than anyone else has ever done, but we still haven’t solved the problem,” Mr. Hogan said.

If there is any good news to be had, it’s that Maryland has not, in fact, tried everything. Even without taking some of the more radical steps some advocates have called for, such as the establishment of safe consumption sites where addicts can use illegal drugs under supervision, Maryland can do more to combat addiction and with it overdoses.

The first place to start is in Maryland’s prison system. Although the state has worked to reduce the number of people who are in jail purely for drug offenses, the interrelationship between substance abuse and other crimes means that an estimated 60 percent of Maryland inmates suffer from some form of addiction. The Hogan administration has sought to address that, for example by exploring the idea of turning the now shuttered Baltimore City Detention Center into a facility to treat the often complex medical, psychiatric and addiction-related problems faced by those awaiting trial or serving short sentences in Baltimore. But the corrections system’s continued reluctance to provide medication-assisted therapy for addiction represents a frustrating missed opportunity.

Maryland is hardly unique in focusing almost exclusively on abstinence-based treatment in prisons. Only Rhode Island has made the anti-addiction drugs methadone, buprenorphine and naltrexone widely available behind bars. But its results have been extremely encouraging — as The Sun’s Doug Donvan reported in his recent analysis of the Hogan administration’s efforts, Rhode Island saw a 61 percent decrease in overdose deaths among those leaving prison after it began screening all inmates for substance abuse and providing medication-assisted therapy.

Detainees in Baltimore City, where the jail is run by the state, are able to participate in a limited methadone program, but those who were on buprenorphine before their arrest are forced to switch medications, a big risk for someone whose addiction was under control. And those who wind up going to prison have to endure detox, except in rare circumstances, which is not only difficult but also detrimental to their long-term sobriety.

Hogan administration corrections officials are aware of the shortcomings of addiction treatment behind bars, and they have taken some tentative steps toward medication-assisted treatment, for example with a pilot program to provide some inmates with naltrexone (a long-acting anti-addiction drug) before they are released. But they have still not been willing to embrace Rhode Island’s approach out of a fear that anti-addiction drugs — and buprenorphine in particular — could be diverted from its intended user and abused, a phenomenon they say has documented ill effects on prison safety. But addictions specialists say the concern that buprenorphine can be abused by those trying to get high is greatly overblown, and that most often, diversion takes place because there isn’t enough of it to treat addiction. If it were as easily available to inmates who need it as insulin is to diabetics, we wouldn’t be having this conversation at all.

Democratic gubernatorial nominee Ben Jealous has pledged to make all forms of anti-addiction medication available behind bars, and we hope Governor Hogan will join him in that commitment. By no means is it the only thing Maryland can do to reduce addiction and overdoses. We remain far from treatment on demand (particularly medication-assisted treatment, which is for most addicts more effective than abstinence-based therapy), and much more can be done on a public health level to track and respond to overdoses. But if the state is looking for one relatively simple thing it can do to stem overdoses, making medication-assisted treatment universally available in prison would be a good place to start.