Schools in Prince George’s County were slated to be open for a full schedule of classes Thursday.

On Wednesday, classes were dismissed two hours early across the Prince George’s County Public School (PGCPS) system, following concerns about extreme heat and air-conditioning problems throughout the district. Temperatures surged above 90 degrees across the Washington region Wednesday, and PGCPS system was forced to send more than 134,000 students home early because of the hot weather and concerns that its aging air-conditioners weren’t up to the task of keeping students and teachers cool. More than 40 schools reported some type of air-conditioning trouble or total failure in some places, officials said. 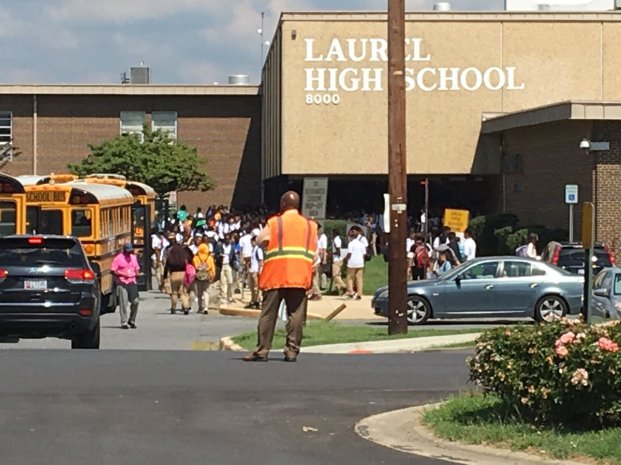 ‘Too hot’ for classes, PGCPS officials say; students released early throughout the District.

At PGCPS Laurel,  Ben Jealous, Democratic candidate for Maryland governor, held a news conference outside Laurel High School in Prince George’s County on Sept. 5. He was joined  by local educators to discuss his plans for fully funding education and ensuring our young people have the resources they need to thrive.

“This is not a time for a governor to stand in an air-conditioned room in the state capital and make pronouncements,” Jealous said, appearing before reporters in 90-degree noontime heat.

“It’s time for a governor to be on the ground pulling together leaders and leading — figuring out how to solve it,” Jealous said. “The governor likes to throw local leaders under the bus. . . . Today, we’re seeing the fruits of that approach,” he told the press at Laurel. 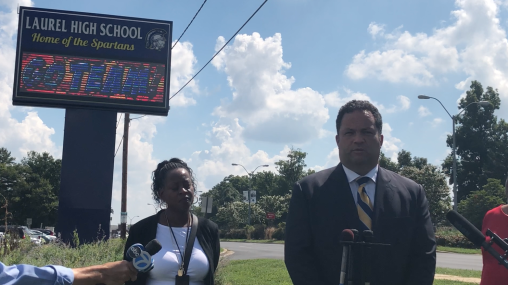 Ben Jealous, Democratic candidate for Maryland governor, held a news conference outside Laurel High School in Prince George’s County on Sept. 5. He was joined by local educators to discuss his plans for fully funding education and ensuring our young people have the resources they need to thrive.

In the meantime, according to Baltimore Sun, the governor opened a regularly scheduled meeting of the Board of Public Works with a broadside against what he called the “completely unacceptable” level of progress by Baltimore city and county in cooling their public schools. Amid this week’s “code red” heat wave, 10 county schools that lack air conditioning have remained closed, while more than 60 schools in the city closed three hours early on Tuesday and Wednesday — and will again Thursday.

The issue of sweltering schools has become a hot political issue as Hogan and Democratic challenger Ben Jealous have sought to assign blame for the closings with two months to go before Election Day.

Many in the community said they did not recall another time in recent years when students were dismissed districtwide because of hot weather and air-conditioning issues on the first days of school. And as they debated the decision and its causes, it also emerged as a flash point in the governor’s race.

School system officials said repair crews worked late into the night Tuesday and started again before dawn Wednesday to resolve problems. Many issues were relatively minor, but 12 schools had larger problems with chillers or compressors, they said. There might be political issues intertwined with the current mess since money has already been dispensed without much being done to resolve the issues.

Gov. Larry Hogan publicly rebuked Baltimore schools CEO Sonja B. Santelises on Wednesday, accusing her of failing to live up to her commitments on a timetable to air-condition seven schools where students were dismissed early as a result of the heat. (Michael Dresser / Baltimore Sun)

“Once again we start the School year with the same issues as before. How come we didn’t properly prepare for these issues and wait until the last min to address them which affects our Children. Day 2
And Day 3 of the school year we have to close school down early due to heat. ( Not even going to talk about Bus Issues, that’s a different day) 2 schools closed due to air conditioning issues and 5 schools ( Maybe More) have issues with the air conditioning in their schools. Friendly HS is like a Sauna

🧖‍♀️ Riverdale ES & Margaret Brent Regional Schools are( Closed) and paint branch kids have 1 fan in the classroom. Are we seriously going to start off another school without addressing these issues or are we going to hold the administration accountable and make sure they fix this because it’s affecting our kids learning. When are we going to start putting our kids first?,” Anthony Tilghman, an activist in Prince George’s County, said in a statement on Facebook.

Others reacted swiftly to various problems within the system which could have been resolved before the schools opened as follows:

Quinton Hill They had all summer to fix where the hvac for the school system.

Belinda Queen Maybe if the County where more welcoming and friendly partners with our Trade Union we wouldn’t have a lot of these problems. Some of our students who is interested in learning the trade and the Union could have been working on these issues all year…

Veronica Jordan What about the schools that have air. Why are they having half a day???? smh.

Belinda Queen They cannot just educate the kids in newer or better Schools while the others suffer. Equality of education for all. They need to enforce Equality of School environmental Building safety and comfort for all.

Veronica Jordan Belinda Queen true they could’ve bused em to the library. im too old school i dont know im bout to move to VA they dont have these problems. lol!!!

Belinda Queen Veronica Jordan we gotta stop letting them run us out and demand better and that they do better. We must replace these Elected Leaders who are failing our students, Children, Communities and our Future Generation of workers and Leaders.

Haniece Fearon-Argueta Yeah, my son’s evening bus didn’t have A/C either. I’ve asked the driver numerous times why does he seem to always get the raggedy buses. The ones he gets always break down now today no A/C. I gave him some water but I just hope he makes it back to the lot without passing out. Crazy.

Rob Anthony Maintenance in the school system is on a major back log and is sorely underfunded. It’s why the Kirwin Commission findings are important as well as the fix the fund bill (which no one is talking about) on the ballot in November is also crucial to making sure we have the funding to fix all these things.

We also have to hold the present Board accountable in terms of where money is being spent.

Alonzo Johnson Government money spent on things that are irrelevant seems to me.

“I am grateful to our hard-working building services and maintenance staff members for responding to each and every problem as it arose,” Monica Goldson, the district’s interim chief executive who is serving the community under a cloud, said in a statement. She thanked parents for their patience and understanding. 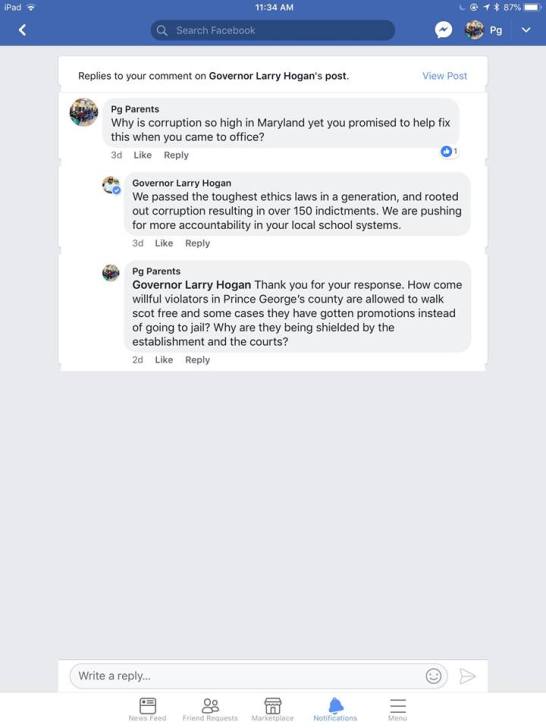