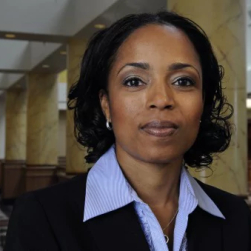 A proud, life-long Prince Georgian, Angela AlsoBrooks was raised in Camp Springs and now resides in Upper Marlboro with her daughter, Alex.

After graduation from the University of Maryland Law School, Angela began her career as a Prince George’s County Assistant State’s Attorney in 1997 and hired by Jack Johnson who was State’s Attorney, Prince George’s County, 1995-2003. Angela eventually become the county’s first full-time prosecutor assigned to handle domestic violence cases where she tried, and successfully prosecuted scores of cases against violent offenders.

On December 2, 2002 Angela AlsoBrooks’ former Boss Jack Johnson was elected the Prince George’s County County Executive and re-elected in 2006. He served an eight year term until his term expired on December 6, 2010.

Shortly after Jack Johnson became the Prince George’s County County Executive, in 2002,  Angela Alsobrooks rose up quickly and rapidly like a Rocket. Jack Johnson appointed her to serve as Education Liaison, where she organized educational forums to help increase parental involvement in schools and environmental based learning opportunities.

In 2003, she was appointed by Jack B. Johnson in another role as the Executive Director of the county’s Revenue Authority. Under her leadership, the agency increased revenue by 40% through their parking enforcement program and some of those funds were used to help the county maintain a balanced budget during the recession. However, behind the scenes, there was a lot of mismanagement of tax payer funds.

Johnson flew business class to Senegal in December 2005 to attend a ribbon-cutting ceremony for homes built by a local developer. The cost of his travel was $6,003, charged to the county, and paid for by taxpayers. Johnson was quoted as saying, “I always fly business class or first class. I think the people of Prince George’s County expect me to. I don’t think they expect me to be riding in a seat with four across and I’m in the middle.” Johnson again generated controversy by staying at the luxurious Bellagio Hotel and The Wynn when traveling to Las Vegas for recent shopping center conventions, two of the most expensive hotels in the city.

In 2010, Angela Alsobrooks with the assistance of her old boss former County Executive Jack B. Johnson overcome a two-percent name recognition against a field of candidates who had all run for public office previously, Angela, by an overwhelming margin, was elected to serve as the county’s State’s Attorney, becoming the youngest and first woman to be elected to the office in Prince George’s County. Her win was courtesy to former County Executive Jack B. Johnson.

In 2011, between March 26th – April 2011 and other dates,  Angela Alsobrooks was presented with overwhelming evidence of public corruption within the Prince George’s County Public Schools (PGCPS). She failed to act during her tenure despite being the chief law enforcement officer in the county. During the entire period since being sworn in, Angela in most cases has looked the other way as children and staff suffered under her watch. She has only showed up for photo ops in many cases. There has been no justice for many including for over 900 school system employees on administrative leave under drummed up charges. Only selective justice for media relations has been a case for Ms. Angela Alsobrooks. Big connected criminals have been allowed to walk Scott free to the dismay of many.

In 2010, the Office of the Maryland State Prosecutor began investigating whether Johnson and four other Prince George’s County council members had solicited bribes and favors while deliberating on a one-million-dollar annual lease for a county agency.

On November 12, 2010, Jack Johnson and his wife Leslie were arrested by the FBI as part of the federal probe of political corruption in Prince George’s County. They were charged with witness tampering and destruction of evidence. According to court documents filed by the FBI, Johnson is accused of taking kickbacks and bribes in exchange for helping a developer secure federal funding for housing developments. Johnson can be heard on a wiretap instructing Leslie to locate and flush a $100,000 check from the developer down a toilet at their home and to hide $79,600 in cash in her bra as FBI agents knocked at the door of their home with a search warrant. The Johnsons were charged with crimes that carried a sentence of up to 20 years in jail for each offense, but they were both released with Jack Johnson being placed on home detention with electronic monitoring. Johnson remained in office until December 6, when his term expired; Leslie was sworn in as a newly elected county council member on the same day; however, she was not eligible to remain in the office if she were convicted of a felony.

On February 14, 2011, Johnson was indicted for allegedly soliciting more than $200,000 in bribes as part of a conspiracy that dates back to 2003. While Johnson is the only person named in the indictment, two unnamed developers were named co-conspirators in the indictment. The indictment reports that the FBI recorded conversations between Johnson, a developer and the county director of housing where cash bribes were solicited.

On May 17, 2011, Johnson agreed to a plea deal in which he pleaded guilty to extortion and witness- and evidence-tampering. Following Johnson’s hearing, federal prosecutors revealed that former county housing director James Johnson (no relation) and developers Mirza Hussein Ali Baig and Patrick Ricker had pleaded guilty as part of a larger corruption probe. Leslie Johnson had been scheduled to plead guilty on May 3, but the hearing was abruptly canceled. Leslie Johnson pleaded guilty to federal corruption charges on June 30, 2011.

On December 6, 2011, Johnson was sentenced to seven years and three months in Butner federal prison in North Carolina. He was also fined $100,000.

Johnson continued serving his sentence after a move to the Cumberland Federal Correctional Institution, with prisoner number 52777-037. On December 15, 2016, Johnson was released to a federal halfway house near Baltimore to serve the remainder of his sentence. He was released from federal custody in June 2017 after serving more than five years, which included a reduction for good behavior.

As State’s Attorney, Angela leads a staff of 100 attorneys and 110 professional administrative staff responsible for prosecuting people accused of committing crimes. As the county’s top law enforcement official, Angela plays a key role in public safety and strives to carry out her responsibilities in a firm, fair and consistent manner.

With the help of corrupt Delegate Dereck Davis and others in Annapolis, She has increased the office’s budget by 40% and successfully fought for additional resources to ensure the office could appropriately support the needs of the community to protect the big fish. Some of the big fish within Prince George’s County include the wife of Delegate Dereck Davis  who is the Deputy CEO to outgoing Dr. Kevin Maxwell.  Alsobrooks has created a truancy reduction initiative that works with schools to keep kids on the right path and she started a program called Back on Track – Prince George’s aimed at giving low-level, non-violent offenders a second chance in the community progress is yet to be seen.

Under her leadership, there has been selective prosecution of cases in which major violators of the law within the County School system and elsewhere are being protected despite major violations involving union executives. Alsobrooks is heavily influenced by lawmakers in Annapolis who have directly benefited from her office despite obvious conflicts of interests. Information given to her directly to help stop crime have been locked under the carpet or trashed which has led to major factor in the record crime withion the school system involving white color violations as well as public corruption under color of law over the last eight years.

Corporations which have contributed a lot of cash to Angela Alsobrooks don’t give their money away for nothing. There is an understanding (rarely made explicit) that large campaign donations buy political access and favorable consideration in policy development and legislation. Why else would a corporation, which is bound by law to pursue profits, make these donations?

In the past we have diligently informed you things with ties to corrupt activities in Prince George’s County in advance before they have happened or in progress. Everything we have highlighted here has turned out to be true.

A campaign post for Angela Alsobrooks with ties to a developer is displayed in Prince George’s County for all to see. What a shame! 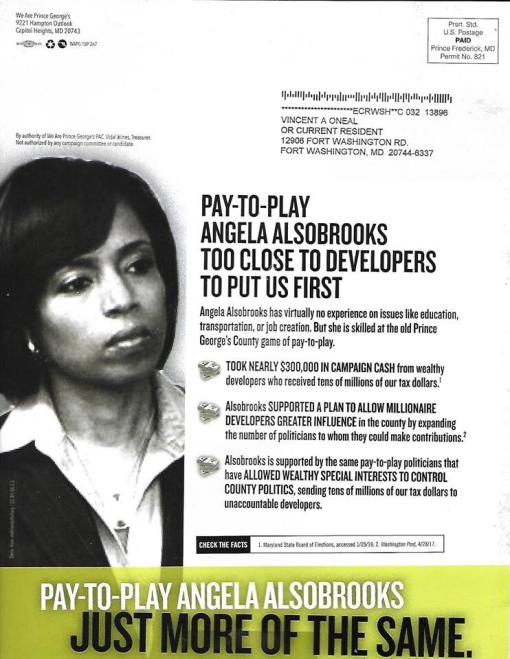