Senate President Mike Miller (left) and Comptroller Peter Franchot (right). Mr. Miller engineered a coup d’état against Mr. Franchot and Governor Larry Hogan and took away some of their power.  Legislative leaders, Democrats are viciously attacking one another in broad daylight

It seems like everywhere you look in Maryland, Democrats are fighting Democrats. From the gubernatorial primary to the battles between Comptroller Peter Franchot and Legislative leaders, Democrats are viciously attacking one another.

First, Senate President Mike Miller and Chairwoman Maggie McIntosh have pushed, behind closed doors, a retaliatory measure targeting their fellow Democrat, Comptroller Franchot. The Democratic legislators have pressed to transfer authority over school construction from elected officials, including Franchot, to unaccountable lobbyists, with Chairwoman McIntosh admitting that this action is “about Franchot.” Comptroller Franchot has responded by denouncing Senate President Miller as “corrupt” member of the “Democratic ‘machine’ in Annapolis”:

Instead, he criticized what he called the Democratic “machine” in Annapolis, and Miller specifically. “They say, ‘Absolute power corrupts absolutely.’ The Senate president has absolute power,” Franchot said. “He’s been flexing it for some time.”

Annapolis has also seen a fierce battle between a group of Democratic legislators pushing for the Comprehensive Crime Bill and the far-left group Progressive Maryland. Last week, Progressive Maryland said that the crime bill was crafted in a “racially biased way” and passing it would be akin to “apathy in the face of genocide.”

“Zirkin called the group’s words ‘dangerous’ and “disgusting.” Zirkin, who is Jewish, particularly objected to the group’s use of the word ‘genocide,’ saying many of his relatives died in the Holocaust. He refused to name Progressive Maryland on the floor of the Senate, comparing the group to ‘a speck of lint on your shoulder.”

Maryland’s Democratic gubernatorial primary has also seen a marked increase in negative attacks recently. Prince George’s County Executive Rushern Baker has borne a significant portion of those attacks because of his close ties to embattled Prince George’s schools CEO Kevin Maxwell. Maxwell’s performance has been under the microscope because of growing scandals regarding unauthorized pay raises and fraudulent grade-fixing.

Last month, Ben Jealous ratcheted up the pressure on Baker when he called for Baker to fire Maxwell:

Ben Jealous, the former NAACP president and now a Democratic candidate for governor in Maryland, believes the Prince George’s County school chief should be fired. In a news release, Jealous said management in the state’s second-largest school system suffers from “incompetence and failure of leadership.” And he called on Prince George’s County Executive Rushern Baker — another Democratic gubernatorial hopeful — to fire Dr. Kevin Maxwell, the school system’s CEO.

The Democratic primary has also been rocked by Senator Richard Madaleno’s accusation that another one of his primary rivals, Alec Ross, used “dog whistle politics” when Ross said that Madeleno “prances around Annapolis talking”:

The politically charged feud unfolding between two Democratic gubernatorial candidates in Maryland — one who is gay and one whose running mate is gay — centers on an infinitive: to prance. The campaign of Sen. Richard S. Madaleno Jr. (D-Montgomery), a longtime lawmaker who is gay, says opponent Alec Ross, a tech entrepreneur and political newcomer, used dog whistle politics when he said that he will get things done as governor, unlike a state senator who “prances around Annapolis talking.”

Tension between warring factions of Democrats in Annapolis are already at a breaking point, while the Democratic gubernatorial primary looks to be entering a newer, much nastier period. It’s clear the Maryland Democratic Party’s political problems are only going to get worse from here. 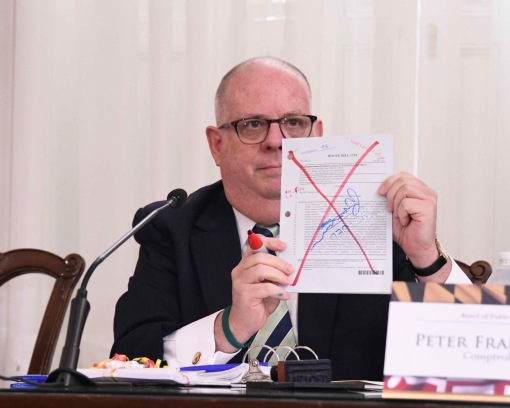 Gov. Larry Hogan on Wednesday April 4th, 2018 vetoed a bill that would remove a 50-year old process of school construction oversight, replacing it with one that gives the legislature more say and eliminates the Board of Public Works’ oversight role.
Hogan vetoed the ‘this last-minute, secret bill’ during the Board of Public Works meeting Wednesday. The move was not unexpected. The governor vowed to reject the bill even before the House and Senate completed work on the legislation. 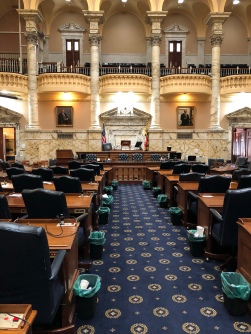