LANDOVER, Md. – A Prince George’s County middle school student says after orientation day at his new school, his bus driver dropped him off at the wrong stop and he was robbed of his new Nike sneakers and cell phone.

The seventh grader’s mother says her son was left at Kenilworth Avenue and Eastern Avenue on Tuesday, which is nearly two miles from their home in Fairmount Heights.

Tameika Jackson didn’t want her 12-year-old son to be identified, but she let him speak with FOX 5 about what happened. He says a group of men approached him soon after he got off the bus.

“This one guy, he came up to me and then he said, ‘Give me your phone and then your shoes,'” the boy said. “And they were at least 20 years old, so I didn’t know what else to do. So I gave them my shoes and my phone. And after that, there was this one girl at the [Metro] bus stop, I walked up to her and asked her if I could use the phone to call my mom.”

The boy said he had told the bus driver where he lived, but was dropped off there anyway. Jackson says she is furious.

“I picked him up, he was barefoot, no shoes on,” she said. “And there was a bunch of junkies out there. He was upset, he was shaking and I just told him everything was going to be fine, but I will get to the bottom of it. And I brought him home. He says he doesn’t want to go back to school tomorrow.”

Jackson says she called FOX 5 because she couldn’t reach anyone at G. James Gholson Middle School in Landover where her son attends.

A Prince George’s County Public Schools spokesperson says they are now investigating what happened and alerted the school’s principal to the situation.

The principal later called Jackson and apologized, saying she will personally make sure the boy is on the correct bus headed to the correct location on Wednesday and in the days to come. The transportation director also contacted Jackson by phone Tuesday night.

Jackson says she never got bus information in the mail prior to the start of school, so her son’s father drove the boy to school Tuesday and spoke to school staff about which bus he was supposed to be on.

She says the child got on the bus he was told to ride. Jackson says she has an older child who attended Gholson and he got dropped off at a bus stop two blocks from their home.

“I’m to the point now that I don’t want to go to work the rest of the week because I want to make sure that he feels comfortable getting on the bus and getting off the bus,” Jackson said.

School officially starts on Wednesday in Prince George’s County, but some students had orientation on Tuesday. 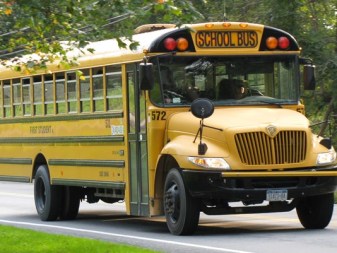