There appears to be some confusion as to who has the right to renew and approve Dr. Maxwell’s contract. The County Executive’s website has language that distorts what is written in the law.

Please note the language in Section 4, Paragraph II. It is the County Board that approves the appointment and Dr. Maxwell’s contract. Since Dr. Maxwell was an incumbent the completion of his reappointment was to happen by March 1. The board never took up that action in any public board meeting. The board does have a backup in that Section 5 gives them until June 30 to make a final decision on filling the CEO position. The law only gives the County Executive the authority to “select”. The Board Chair is the entity the law gives to approve Dr. Maxwell’s contract; not the County Executive. Now, of course, the County Executive appointed his brother-in-law as the Board Chair, so we almost know where that is going.

Now let’s say the County Executive, for appearance sake, agrees to the NAACP’s request. Dr. Maxwell could appeal to the State Superintendent and would most likely prevail because the County Executive does not have jurisdiction over this decision. He can only “Select” — not appoint, renew nor approve the CEO’s contract.

Once again, we have another perfect example of why the Maryland Constitution forbids our state legislators from passing laws that create a monopoly. There are no checks and balances when an elected official runs renegade, as Baker has done.

The actions of the NAACP were noble, but misguided. The request to delay the contract should have been directed to Dr. Segun Eubanks.

Also, there is another level of approval required and that is the State Superintendent, who can reject the county board’s recommendation and considering they are investigating Dr. Maxwell and his administration at the Governor’s request, I think such action is warranted.

People you need to bombard both Dr. Eubanks (segun.eubanks@pgcps.org) and Dr. Karen B. Salmon, State Superintendent’s office to let them know you want Dr. Maxwell’s contract delayed pending the outcome of this investigation. Dr. Salmon’s Chief of Staff is Gayle Secrist (gayle.secrist@maryland.gov). Let’s take action NOW and share this post!! 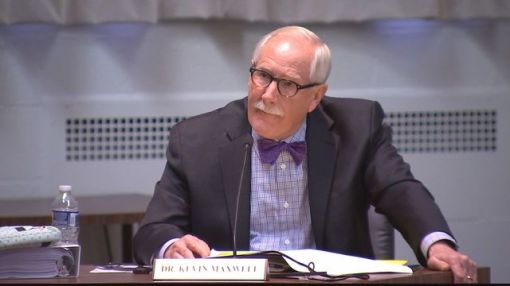