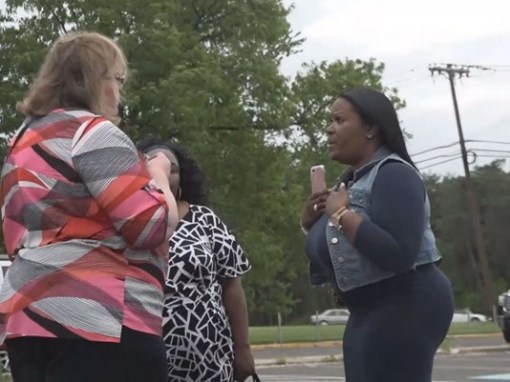 LANHAM, MD. (WUSA9) – Parent Keisha Chase has 900 signatures on a petition and just wants a meeting with Prince George’s County School Administrators over concerns about the future transfer of a popular assistant principal and other issues at DuVal High School.

What she and a group of supporters got Monday night was a mystifying run-around that one board of education member who witnessed the goings on at DuVal High School called “silly.”

Along the way, one of the school system’s administrators overseeing principals ordered WUSA9 reporter Scott Broom to leave DuVal’s property, but relented when three board of education members said Broom could stay on their authority. The board members told administrator Kathleen Brady they would accept “responsibility” for the reporter being there.

Brady was among three top administrators including two deputy superintendents who answer directly to School CEO Dr. Kevin Maxwell who showed up for what parents billed as a “rally” and meeting at the school. But all the top brass refused to discuss school issues with parents and would not read or accept the petition.

Instead Deputy Superintendent Monique Davis politely explained that the parents had failed to fill out the required forms to hold a meeting and that she and the other top officials had come to answer questions about the proper procedures for holding a meeting with school administrators.

Earlier a school spokesman provided WUSA9 with an exhaustive 14-page policy on holding meetings at schools that warned it can take 30 days to get approval once requests are made.

After School Use of Facilities by wusa9 on Scribd

“We’re all responsible adults. I don’t understand. You ladies are here,” Chase protested.

“It’s like what are you hiding? What are you scared of?,” asked parent Rene Brand.

“We just want to make sure that, one, we advertise to all of the parent community at DuVal; and two, that we have all the appropriate forms based on our policies completed,” Davis explained to WUSA9.

Earlier in the day Murray met with WUSA9 saying: “What we’ve taken as a decent sized problem and made it bigger.”

The student representative on the Board of Education, Juwan Blocker, called the failed attempt at a meeting “disappointing”.

“For there to be three officials from the administration here today and for them to say they’re not going to do it because of a form that wasn’t signed? I think it’s absolutely ridiculous,” Blocker said.

Dissident Board of Education Members who are all young adults are advocating for more openness and transparency as Prince George’s County’s Board of Education is currently debating limiting public comments at its regular board meetings.

David Murray Was on channel 9 at 5:30PM speaking up for the parents and students of DuVal High School. Parents are our partners, and need to be treated as such. The refusal of the school system to engage with our parents is unacceptable.