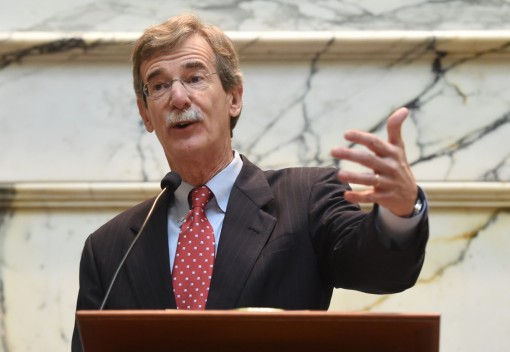 After a nearly two-hour debate, the Maryland Senate approved a resolution late last week that gives the attorney general authority to take legal action against the federal government without having to first get permission from the governor.

The measure, which is on a legislative fast track, now goes to the House. The Senate’s 29-to-17 vote came more than a week after Attorney General Brian E. Frosh (D) said he asked Gov. Larry Hogan (R) but did not receive clearance to move forward to sue the Trump administration.

Raquel Coombs, a spokeswoman for Frosh, said Friday that the attorney general sent a letter to the governor on Feb. 1 asking for permission to take legal action against President Trump’s controversial entry ban but never received an answer.

“He has not said yea or nay,” Coombs said.

During a media event in Baltimore on Friday, Hogan was asked about the resolution and whether he responded to Frosh. He said the two had gone “back and forth” over the issue.

“He is an independently elected constitutional officer and he does what he wants to do, and now the legislature has given him more power,” Hogan said.

Senate Democrats moved the resolution quickly, to the chagrin of Republicans, who said the measure was a partisan attack against Hogan in an attempt to tie him to Trump.

But Democrats balked at the notion, saying 41 other attorneys general can bypass the governor and legislature to sue the federal government.

Sen. Dolores Kelly (D-Baltimore County) said the state attorney general should be able to respond to the actions being taken by the Trump administration on immigration, health care, consumer protections and the environment.

“Time is of the essence,” she said. “So many threats and actions are in fact impacting states’ rights.”

Senate President Thomas V. Mike Miller Jr. (D-Calvert), who has expressed his concerns about the future of the Chesapeake Bay, told his Republican colleagues that the resolution was “aimed at Capitol Hill” and had “absolutely nothing” to do with Hogan.

On Thursday, the majority of the Republican caucus walked out in protest after trying unsuccessfully to delay an initial vote on the resolution.

In other business Friday, lawmakers in the House approved a bill that would prohibit firearms on Maryland’s public college campuses. The legislation, which moves to the Senate for consideration, passed 84 to 49, with no Republicans supporting it and four Democrats voting against it.

Advocates say the bill would improve campus safety, but Republicans said it would strip individuals of their constitutional right to bear arms and their ability to protect themselves.

Del. Pam Queen (D-Montgomery), an assistant professor at Morgan State University, said guns on campus could cause fear and stifle intellectual debate, potentially cause minor altercations to escalate into deadly violence, and create anxiety among faculty over posting grades.

Republicans failed to win support for several amendments to the bill, including language that would have required colleges to arm their security forces and provided an exemption for cases in which state police have determined that an individual’s life is in danger.

The bill would require colleges to notify the public of the firearm ban with signs posted in prominent locations, including at campus entrances.

The House passed similar legislation last year, but the Senate never voted on it.

In this file photo, a Maryland State Trooper stands guard at the doors to the Maryland State Senate chamber in Annapolis, Md., Wednesday, Jan. 11, 2017, the first day of the 2017 legislative session. (AP Photo/Patrick Semansky) **FILE**

The Maryland Senate voted 29-17 Friday for the resolution. All of the Senate’s 14 Republicans and three Democrats voted against it.

Supporters cited concerns about the potential repeal of the Affordable Care Act and worries about lax enforcement of regulations to protect the Chesapeake Bay.

Democrats also noted economic concerns relating to possible reductions in the federal workforce, because Maryland has a large number of federal workers. They say their constituents are scared about what may happen next in Washington.

Maryland Attorney General misconduct in the State of Maryland is terrifying:

However, the real reasons Maryland legislature voted for Maryland Attorney General to have more powers was something else – and they’re terrifying. We will be highlighting this shortly in this blog including interference of state courts by the Office of the Attorney General of Maryland in conspiracy with the Maryland Democratic party regime. Stay tuned.

It is utterly depressing to have to accept the fact that so many legislators in Maryland voted to give more power to the Attorney General who is engaged in misconduct, if only by proxy, colluding in their own subjugation, but to understand why it has happened is incredibly important.

The prosecutor has more control over life, liberty, and reputation than any other person in America. His discretion is tremendous…. While the prosecutor at his best is one of the most beneficent forces in our society, when he acts from malice or other base motives, he is one of the worst.