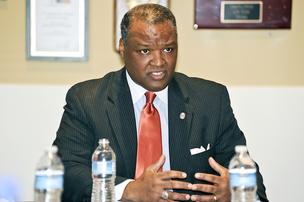 The top elected leader of any jurisdiction shouldn’t have to take the weight for everything that goes wrong.

However, when that leader seeks authority over, say, education — and receives it — he is duty-bound to take the weight.

A Democrat, Mr. Baker sought control of schools a couple a years ago, and then-Gov. Martin O’Malley, a fellow Democrat, granted his request, as did the General Assembly, where Mr. Baker once represented the very county he now presides over.

While neither the county nor its public schools were modern-day national standouts before the takeover, the troubled public school system has called into question both the current leadership and the future political gravitas of one of the nation’s black voter strongholds.

The situation is largely due to 1) local and federal probes into what Gov. Larry Hogan rightly calls “horrendous and deeply troublesome” child-sex and child-abuse allegations, and 2) the loss of more than $6.3 million in federal Head Start funds amid allegations of abuse in at least three schools.

Parents are raising Cain, and well they should. The problems would be gravely serious in any school district. That they occurred during one calendar year — this year, 2016 — points up a crisis.

It’s clear the Prince George’s County Board of Education, which Mr. Baker proposed to shred in 2013, has shirked its responsibility to oversee and sustain the health, education and safety of students. Members of the board, in fact, voted against appealing for the federal money and instead decided to simply forgo the funding. (Their choice, to be sure. Just the wrong choice.)

More important than the board’s bad choice, though, is the laid-back response of Mr. Baker and his administration.

Mr. Hogan’s response is the straw that breaks Mr. Baker’s back, as he urged the school board and the county executive to get busy. Calling the recent allegations “involving multiple officials” in Prince George’s schools “horrendous and deeply troubling,” the governor said his administration has reached out to school officials as well as county authorities to ascertain “what steps are being taken to address this issue.”

He then threw down the gauntlet on behalf of parents and children: “With investigations still underway, Governor Hogan urges local leadership and school officials to do everything in their power to protect the students in their care and ensure that parents are always kept informed about the well-being of their children.”

Mr. Baker got himself into this fine mess.

He asked the state to give him the political and bureaucratic authority over the public school system, and he got the strings.

He handpicked school board members and the schools chief.

His choices improperly handled the child-sex, child-abuse probes that led to the indictment of school aide Deonte Carraway, 22, on 270 charges earlier this year.

He bungled the strings to $6.4 million in federal Head Start money, and parents found out the hard way that part of the reason the strings were cut was because of child abuse allegations, including those at Judge Sylvania Woods Elementary, which was rocked by the Carraway scandal.

On top of that, Prince George’s parents learned this week that the new principal at Woods, Brian Jones, has been placed on leave.

Mr. Baker is the elephant, er, camel in the room.

To paraphrase Mr. Hogan, local leaders and school officials must do everything in their power to protect students and ensure parents are always kept informed.

And, I add, local leadership starts at the top, with County Executive Rushern Baker.

• Deborah Simmons can be contacted at dsimmons@washingtontimes.com.