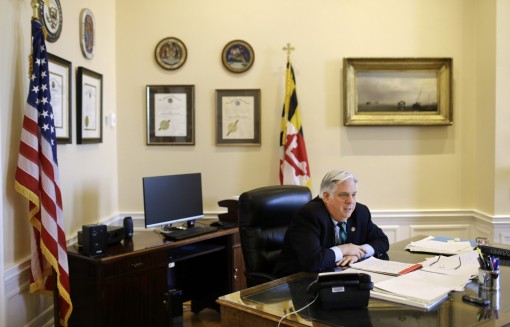 Maryland Gov. Larry Hogan discusses the budget debate in the final week of the state’s legislative session during an interview in his office on Monday. (Patrick Semansky/AP)

Maryland Gov. Larry Hogan’s proposal to compensate companies for donating to private schools is one of many sticking points in budget negotiations with the General Assembly.

A supplemental budget proposal submitted by Hogan to the General Assembly last week does not fully fund public education, but it would provide $5 million to reimburse businesses for no more than 50 percent of the “certified amount” they contribute to a student assistance organization to provide financial assistance to students attending non-public schools.

Pushing for the grants that would benefit private and religious schools has elated non-public school administrators, angered public school parents and teachers, and divided lawmakers.

Hogan has called the Building Opportunities for All Students and Teachers (BOAST) Maryland Tax Credit “common sense reform.” Opponents call it a back-door maneuver to vouchers.

The grants are one of two education initiatives put forth by Hogan in his first year as governor. The other is an expansion of charter schools.

“There is tremendous resistance from a lot of people who believe strongly in public education that this is not the appropriate way to go and this has cost other states money and that we shouldn’t be diverting that money,” Busch said, noting that the state provides $10 million in grants to non-public schools to pay for textbooks, technology and infrastructure.

Ray Leone, president of the Maryland PTA, said the organization opposes Hogan’s proposal because it diverts funds from public schools.

“We urge you to stand up at this point for schools that serve all of Maryland’s children, and for protecting the integrity of regular order in the legislative process,” Leone said in a letter to members of the budget conference committee. “We do not believe that last-minute, privately-bartered deals regarding funding for education (or any other public service) inserted into budget conference committee reports that have not previously considered such issues are in the best interest of Maryland taxpayers and families.”

A bill that would provide tax credits to companies that donate to private and public schools has previously failed in the General Assembly.